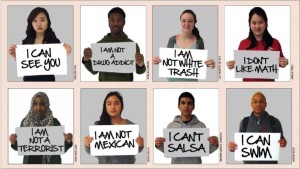 I’m lost. I am feeling as if I am, on the one hand, very thick and dense and clueless, and on the other hand, knowing I am ignorant as hell and in need of a very deep and intense education. I know that this post is going to possibly inflame emotions even more. I’m not trying to do that. I’m trying to light a candle and to understand. I’m trying to figure my way though.

But, I am not powerless, am I? I am ignorant; there is some possibility I can never know how ignorant I really am – simply because I am white. I don’t believe I’ve buried my head in the sand but I haven’t exactly stood up and put my body between ignorant violence / hate and anyone of color, either. I have read history of all sorts: American, British, black, white, Hispanic, indigenous peoples of all kinds. Growing up in California, you learn to speak psuedo-spanish and learn where the Spanish names of your towns come from. There was a time I believed, as a child, I must have been of Hispanic descent simply because I was born in California. You live in a true mixture of culture, color, and identity. I learned from families of all races and nations around me. In some ways, you think the entire world is colorful, like California or New York City.

What you don’t learn as a child, or at least when I was a child, was the cruel conditions that both Native Americans and Mexicans have had to endure to bolster our economy in California. I learned all of this much later, as a very ignorant adult. You don’t see and understand the Southern California and San Jose gang violence until you understand how racism has created a great deal of the underlying issues in the state. When you grow up in the idyllic suburbia, you don’t hear racial slurs and see frightened faces walking down streets at night. You are spoon-fed what the city-state wants you to know and you effectively learn nothing about what it is like to grow up black, brown, red, yellow, or any shade in between. You have no idea about the white-bread news you’ve been getting and how it is so far from the reality that some people live day to day. You grow up ignorant and are shocked when the world smacks you in the face with its ugly, racist self.

Growing up ignorant is no excuse and I have spent years correcting that. I have learned to seek out the less-heard history of minorities and women, to better understand how we 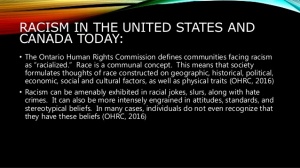 became the way we are. I’ve taken classes, read books, listened to speakers, and talked with friends who are not white. I’m still feeling my way through all of this. I hear from all sides that I should not be insulting and say “I don’t see color.” It’s demeaning to say I’m an ally of a movement, and it’s shameful that white mothers say “I’m teaching my children to see beyond color.” Intellectually, I understand that it means that I am discounting a racial history when I say that. I am ignoring someone’s racial culture and the events that lead up to this cruel moment in time. It means I am not seeing the past and ignoring the present.

I then turn my brain to the idea that I have to remember everyone’s history because everyone, with the exception of the white male, has been through “something.” Jews, Blacks, Mexicans, Women, Muslims, Christians (Yes, even them) have been through some sort of past trauma and are still going through trauma, hatred, and inexcusable violence. Misogyny stirs in the hearts of even the most visible political candidates and celebrities. Racial and Gender profiling are rampant – politically and in our law enforcement. I am not ignorant to that. I am not ignorant to the fact that slavery is “recent” memory (and not simply gone as we want to believe…), that Jim Crow is alive and well and living in prisons, and that the horror stories that people tell, of living in fear and seclusion for just the color of their skin are real. Of course they are real. All of the blood of black men on the sidewalks, shed by white men, proves it. There is no denying it. It’s not global warming people; it doesn’t take a rocket scientist to figure this out.

What am I not getting? I’m not getting how treating everyone equally is wrong, or insulting. What I want to understand is that when I say “I don’t see color,” I’m not saying I don’t see your blackness or redness or gayness or browness; what I’m saying is that I want to treat you like a human being that deserves love, kindness, freedom to do what you want. You deserve my open mind, my laughter, my tears, my thoughts, my compassion, my trust, my forgiveness, and my attention. I know that others do not and I acknowledge that. I will fight for it if I see it happen in front of me, in print, and when I can. I will fight, as I would for any human being that is being oppressed. I will ask, what can I do? Not assume that I know what needs to be done. I would do that for anyone – regardless of color, creed, gender, sexual orientation, or religion. And that is what I don’t understand – how, if I do this, it’s insulting. What am I missing? Maybe the difference is personal one to one interaction versus cultural interaction. Maybe my problem is to think that these simple words will overcome an entire cultural problem.

I feel like I am lacking something key, some light, some enlightenment and then I will understand and find a voice. I am lost when I cannot communicate clearly and this… this issue… Racism and Discrimination… it needs, requires, demands clear and thoughtful communication.

I will continue to educate myself. I do not expect anyone who is fighting racial injustices to teach me. If I teach myself, I will own the light bulb that goes off. I will continue to stand up for the wrongs I see happen and ask, what can I do? I do not expect to sit idly by and let others do the heavy lifting. I will listen. And today, I will listen hard. Today, when yet another black man has been shot by a white police officer, in front of his girlfriend and a child, is not the day to have a dialogue about helping. Maybe. Maybe not. We have to mourn the dead and the stupidity before we can find the strength to combat it.

Right now, I am simply sad for the entire human race.

One thought on “I am Ignorance Teaching Herself”